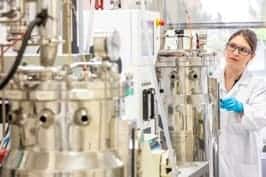 GTP Bioways will become the unique CDMO in France with this offer, based on two new lines, one focused on microbial production, the other on small-scale mammalian-based production

Toulouse, France, October 22, 2021 – GTP Bioways, a CDMO (Contract Development and Manufacturing Organization) specializing in the production of biotherapies and nanotherapies, today announces an investment of €12M ($14M) into two new biopharmaceutical production lines at its site in Toulouse.

The first line will be dedicated to production using microbial systems (bacteria and yeast). With a capacity of 300L, it will be operational in the first quarter of 2023; this will enable GTP Bioways to respond to a rapidly growing market. GTP Bioways will become the only CDMO in France offering a GMP (Good Manufacturing Practices) unit for producing proteins with therapeutic or vaccine-related applications, as well as enzymes for manufacturing mRNA vaccines and synthetic DNA. GTP Bioways’ project was awarded by the ‘Capacity Building’ call for proposals launched by the French government as part of the France Relance scheme, spearheaded by French investment bank Bpifrance. The microbial production unit project has the support of the Programme d’Investissement d’Avenir, with a €5.9M ($6.9M) backing.

The second pharmaceutical manufacturing unit is designed for the culture of mammalian cells at a scale of 10L. With this second unit, GTP Bioways will be able to produce small batches of proteins and antibodies – varying from a few milligrams to a few grams – for a range of applications. From Q4 of 2022, the unit will be able to manufacture biomolecules for vaccines and RMPU (Raw Materials for Pharmaceutical Use) for the production of cell therapies. This is a fast-growing need and one that very few European CDMOs are currently able to meet. GTP Bioways recently won a contract for the first clinical batches of a nasally administered SARS-CoV-2 vaccine, developed by Tours University.

“We are one of a select group of companies in Europe who are able to provide process development and manufacturing services to biotechnology companies that are working on innovative treatments,” says Eric Devic, CEO of GTP Tech. “The current biomedicine production capacity in France and Europe is not sufficient to meet burgeoning demand. By investing in domestic production lines, we can respond to this situation.”

GTP Bioways’ new production units fit comfortably with the French government’s initiative to bring industrial activity back to France. This was clearly demonstrated with the program ‘Grand Défi Bioproduction‘, launched in 2020, to build a domestic biomedicines industry. Looking beyond the current circumstances with the COVID-19 pandemic, one goal of GTP Bioways is to become a preferred partner for biotechnology companies developing innovative treatments. This would see the company contribute to producing biopharmaceutical products within Europe, specifically in France; thereby helping to strengthen the nation’s ability to meet its own needs for biomedicines.

In order to be able to launch these units rapidly, GTP Bioways is consulting with V3ie, a subsidiary of Validapro, who will help with the building’s engineering and compliance with international regulations. GTP Tech, a member of the GTP Bioways group, with production sites in Toulouse and Labège, intends to double its headcount. It plans to meet the needs of this new site by adding to its production and quality assurance teams, and increasing staff numbers from 45 in 2021, to nearly 100 in 2025.

For over 20 years, GTP Tech, a French contract research company, has provided expertise in the development of bioprocesses and bespoke recombinant proteins production services. This consists of creating and optimizing bioprocesses with a variety of expression systems, including bacteria, yeast and mammalian cells.
The company was founded in 2000 and is based in Toulouse and Labège. It became part of the GTP Bioways group in 2019. GTP Tech currently has 45 staff and has so far completed more than 1,500 projects, with a turnover of €4.5M ($5.2M) forecast for 2021.

GTP Bioways is a CDMO (Contract Development and Manufacturing Organization), offering a unique service in developing production processes and manufacturing biotherapies, antibody-drug conjugates and nanomedicines.
With its development and production sites based in France, GTP Bioways supports biopharma companies aiming to develop innovative molecules, from R&D through to clinical trials.
The majority of the Toulouse-based company’s shareholders are French. The various members of the GTP Bioways group generated a turnover of €14M ($16.3M) in 2021. It employs 100 staff. www.gtp-bioways.com

Connect with our team and we will get back to you shortly.