Biotherapeutic development: how we optimized CHO transient transfection for protein and antibody production

In this article, you’ll learn more on how we got there: from the advantages of using a transient CHO system instead of HEK cells over the results obtained with three different CHO transient technologies to our in-house protocol and high-throughput production services.

Thanks to their multiple assets for bioproduction, CHO cells are the predominant mammalian host for the production of biotherapeutic proteins. HEK cells, on the other hand, are the host of choice for researchers who use transient transfection to obtain a mg to gram scale of material in a short timeframe. Indeed, up to recently, HEK cells could generate significantly higher titers – in some instances 50 to 100 times higher – than CHO cells.

As a change in expression host can be detrimental to biotherapeutic development projects, providing cell host continuity is key to significantly reduce the quality risk when the project transitions from research to development. As a consequence, GTP has always preferred CHO cells for early material expression as CHO-derived proteins are more similar to proteins made in stable CHO cells in terms of critical quality attributes.

A few years ago, there were no efficient transient CHO platforms on the market, which is why GTP decided to use a “transi-stable” CHO technology based on episomal expression. This approach allowed us to obtain a pool of stable clones in a relatively short timeframe. For the production of antibodies, the technology showed yields in the range of 50 to 200 mg/L. One of the main advantages was its easy and cost-effective scalability in comparison to transient transfection.

However, the necessity to generate stable-pools was not well suited for screening campaigns that included up to 100 variants of a molecule. For that reason and because several CHO transient platforms are now available on the market that claim high transient titers – above gram per liter – we decided to develop a CHO transient transfection platform to replace our “transi-stable” CHO technology.

Our goal was to establish a simple, efficient and robust platform for transient expression in CHO cells, capable of generating hundred milligrams-per-liter protein titers in 8–10 days. This would allow us to easily produce up to several grams of a monoclonal antibody for the early development stage.

To achieve our goal, we evaluated several CHO transient technologies with the purpose of selecting the most efficient and robust one. Our evaluation included 2 integrated transient CHO technologies with different components and one stand-alone transfection reagent:

The three technologies were used to express two mAbs, a rabbit IgG4 and a human IgG1 in parallel. The ExpiCHO and CHOgro systems were first evaluated using all the components of the technology. As advised by ThermoFisher Scientific, we tested ExpiCHO for 3 different expression protocols: Standard, High Titer, Max titer.
Our conclusions after the first series of experiments:

We then worked on establishing an optimal protocol, which would allow the highest productivity (at minimum 200mg/L) while maintaining an acceptable range of reproducibility. To evaluate productivity and robustness, we designed a series of new experiments, which included testing the ExpiFectamine transfection reagent from the ExpiCHO kit, with several media and following different protocols.

The screening allowed us to select our own optimized conditions that offer a good compromise between productivity and robustness. 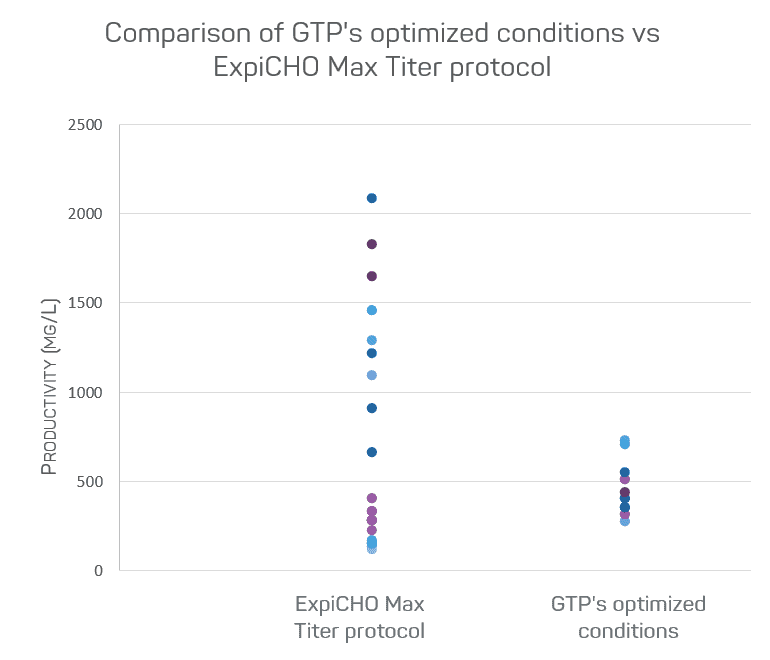 The table below shows some of the results we achieved for several mAbs and recombinant proteins: 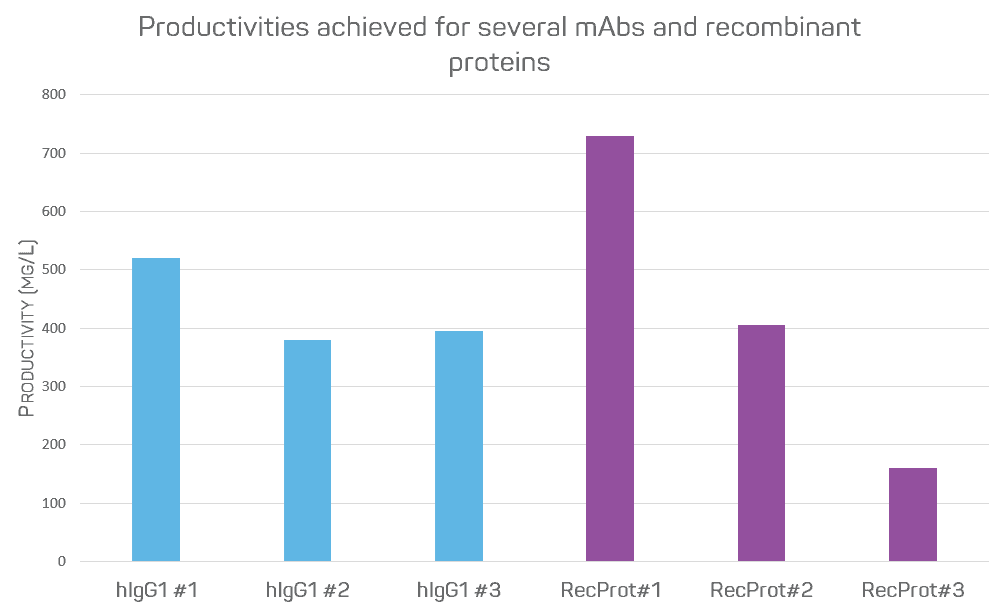 The ExpiCHO platform shows yields that are comparable to those obtained with HEK cells. However, according to our observations during the implementation of this system, these excellent results have to be weighed against the system’s lack in robustness. By using only part of the ExpiCHO components and optimizing protocols, we have established an in-house protocol that allows for high – productivity while guaranteeing good reproducibility with an easy-to-implement system.

GTP Bioways’ team is therefore proud to offer our new high-throughput production services: we’re now able to conduct hundreds of transfections in parallel, which can, for example, be used to screen antibody humanization variants.